Monarchs embarked on the journey north

Spring has officially arrived. My daily walk takes me through a forest clearing deep in snow. As always in that spot, I have a vivid memory of its summer residents, Monarchs enjoying the milkweed, drifting from plant to plant, the females laying eggs that would turn into boldly striped caterpillars.

Those that emerged here last fall and made it to the Mexico wintering grounds are among the ones that are now returning. Journey North is reporting sightings in a band across the continent - Texas, Oklahoma, Mississippi, Louisiana, Georgia, Florida. Over a couple of generations, some of their progeny will make it back to the Simcoe forest tract where the Common Milkweed flourishes in the sandy soil.

They’re on their way.

March is the month Monarch butterflies start moving north from their wintering grounds in the high mountains of Mexico. And the colony at Cerro Pelón Butterfly Reserve is on the move, Ellen Sharp advised last week. She and her husband Joel Moreno own the JM Butterfly B&B at the edge of the reserve, where I stayed in December. In mid-February, the weather warmed, a “massive amount of mating” was observed, and the remigration north appeared to begin, early.

All is not well.


First, the Monarchs’ numbers are down, by more than half. The way the population is measured each winter is by calculating the area covered by the colonies. A week ago, World Wildlife Fund Mexico reported the area at 2.83 hectares, well down from 6.05 hectares in 2018-19. That translates to about 141.5 million butterflies this year, compared to 300 million last year. 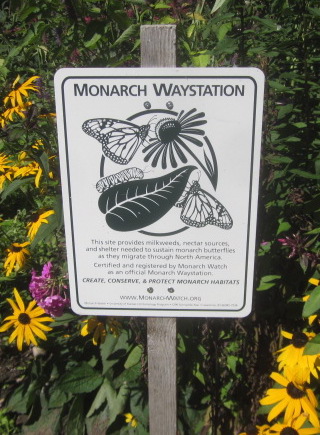 Chip Taylor of Monarch Watch, the Kansas-based citizen science network that tracks the Monarch migration and promotes conservation, had predicted the numbers would be down this year. One reason was that Monarchs moved north too soon in 2019, laying eggs at cooler latitudes, resulting in slower development and reproduction at an older age.

“Growth rates of populations decrease as age to first reproduction increases. Because most first-generation monarchs migrate north in May and early June, the conditions during that time period are critical,” Taylor writes in a recent blog. “In 2019, those conditions – mostly lower temperatures — delayed the recolonization of the summer breeding area north of 40°N. Delayed arrivals can ripple through the rest of the breeding season, resulting in a late migration.”

And that’s what happened. Although we in Ontario were delighted to share news of more Monarchs than we’d seen in years, the migration was later than normal, “absolutely the latest to date” by two weeks in Kansas, Taylor writes. Late migrations are associated with fewer numbers reaching Mexico.

Alas, this year appears to be a repeat of the spring mis-timing observed in 2019. Monarchs are in Texas at least three weeks earlier than the traditional spring equinox departure date because of warmer-than-normal temperatures in Mexico, according to Texas A&M Professor Craig Wilson.

“On Wednesday, March 11 I spotted the first arrival from the state of Michoacan, Mexico,” Wilson said in a news release. “It was a female with very faded wings, so she likely migrated through this area last October heading to Mexico. She appeared desperate to lay eggs on milkweed but only a few tiny leaves are emerging.”

Wilson added that it’s critical that people plant milkweeds in their gardens this year. These are the plants that have the foliage which the caterpillars are able to consume. It’s also important to have nectar plants that will sustain the adult Monarchs in their spring and fall migrations. And it is more vital than ever for farmers and ranchers as well as public land managers from every level of government across the continent to make room for milkweeds, native grasses and wildflowers and to avoid pesticides that kill or distort development of the butterflies and their caterpillars.

For Huronia gardeners, to fill the nectar gap in June before the milkweeds come into full bloom in July, make sure you have early-flowering plants - Wild Columbine, Virginia Waterleaf, Wild Lupine and Canada Anemone are options - and for fall after the milkweeds have gone to seed, plant Evening Primrose, Blue Vervain, Joe Pye Weed, phloxes, goldenrods and asters, so the Monarchs can get fuelled up for migration. 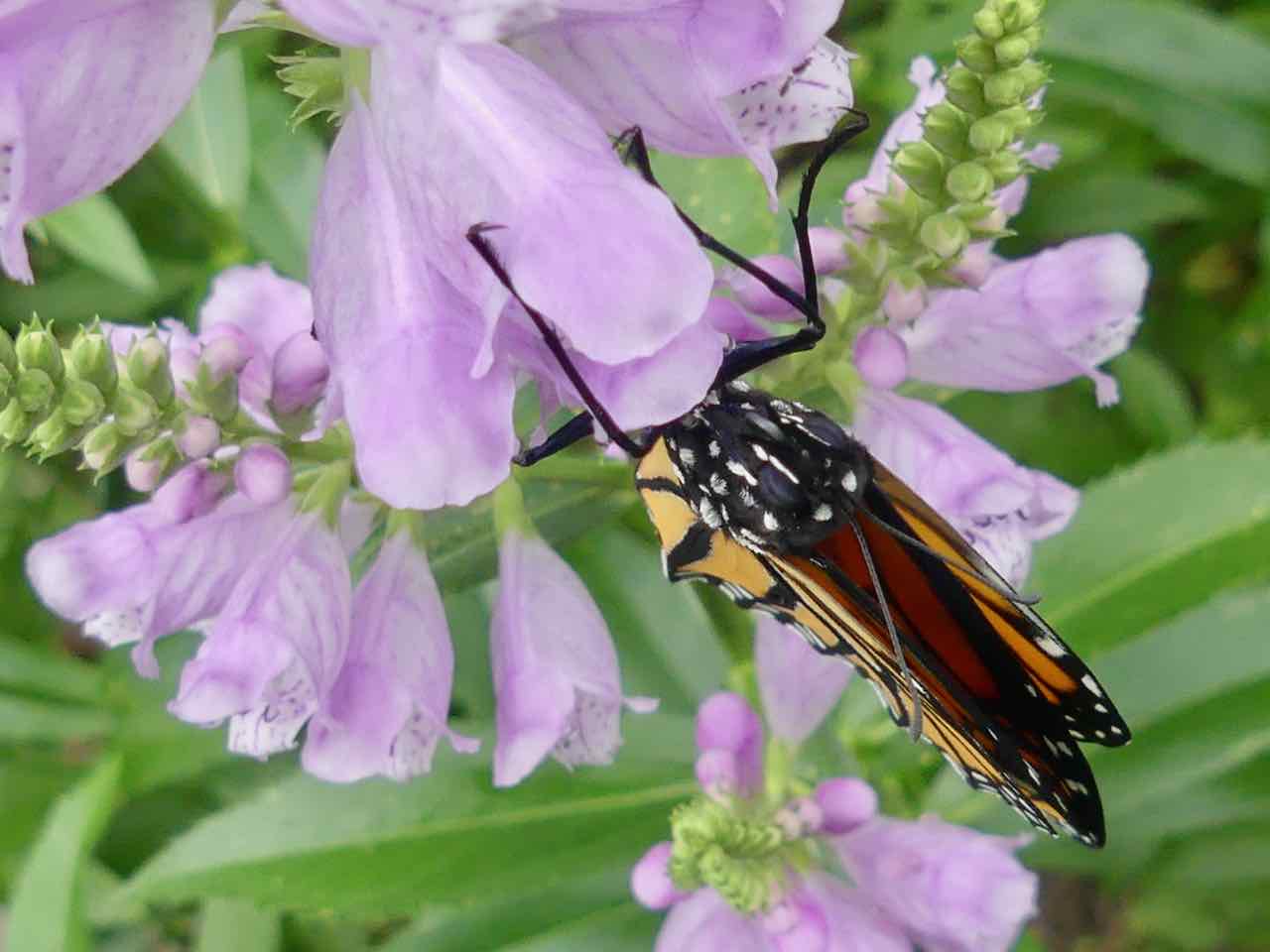 We should be mindful. Last year, collecting milkweed to feed Monarchs that I was rearing outside under netting to protect against predators, I found a really promising patch growing out of the gravel at the edge of a business parking lot in Elmvale. I picked there for a few days and then stopped, because I wanted to leave enough for passing Monarchs, and also to ensure healthy growth for future years.

A couple of weeks later I drove past, glanced over to see how the milkweed was doing and it was gone. The parking lot had been resurfaced. No one involved will have suspected that they had eliminated a precious resource for a beautiful and beleaguered butterfly. That’s the problem - a disconnect from the natural world such that people generally have no idea of the harm they inflict on other species. At a time when our own species is battling natural forces beyond our control, we need to observe, we need to learn.

To learn is sheer delight. It is quite magical to watch a Monarch making its way out of a chrysalis, which over the previous couple of days has changed colour from jade green to a dark orange and black. A crack opens, a leg emerges, then another, then the two antennae pop out. The butterfly slowly reveals itself, looking very fat and rounded, the stomach quite white. There’s a lot of cleaning of the face with two short furry appendages. These are vestigial legs; although the Monarch has six legs like all insects, it looks as if it has only four. The proboscis unfolds a couple of times. The body elongates and slims down. The butterfly hangs down for about 10 minutes before the wings are fully unfurled. A telltale dot appears in the patterning - it’s a boy! The joy associated with bearing witness to this metamorphosis is beyond words, especially if you are sharing the experience with a child.

An hour or two later the Monarch flies off into a world fraught with peril. Not just pesticides, drought, and climate change. Economic interests threaten the integrity of the Oyamel fir forests upon which the butterflies depend.

In January, Homero Gómez González, the head administrator of El Rosario Butterfly Reserve disappeared, his body found two weeks later floating in a well in Ocampo, a nearby town. A few days later, the body of a butterfly reserve tour guide was discovered in the same area.

Many reports portrayed the deaths as attacks on heroic environmentalists. Others hinted at a more complex narrative related to Gomez’s role in balancing economic interests. “In this system, it’s easy for a leader to become abusive with the community’s income,” an anonymous source told the Guardian.

Regardless, the logging industry, both legal and illegal, is a threat to the Oyamel forest. And two killings remain unresolved.

I travelled through Ocampo in December, and insisted on stopping to take a picture of a road sign for Calle John Lennon. I was so intrigued by the fact that the people of this small remote town had commemorated one of the more uncompromising idealists of the ‘60s generation. 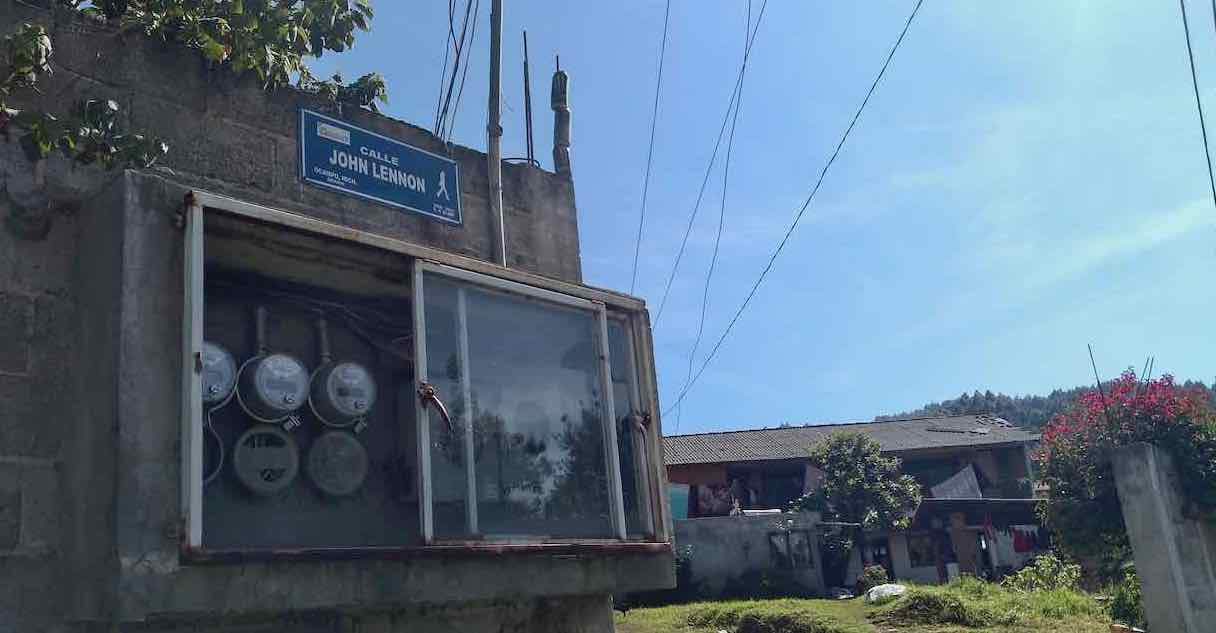 Now, there may be a tragic connection: murder, and rejection of a vision of the world as a better place.

The Monarchs’ summer breeding range extends more than 100 million hectares, their winter roosts cover less than 20 hectares (18.1 hectares was the most recent high, in 1996-97). Can we not protect that?

Previously: On the Monarch migration trail: It's such a long way

P.S. Migrant birds are returning to our area. Share some seed, put out some water, don’t “clean” the leaf and other natural detritus out of the yard - if you left it there last fall, that’s what the robins and other birds are picking through to find their food. 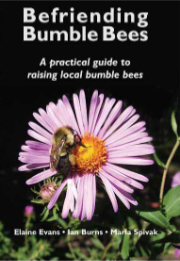